Working With Students in Groups 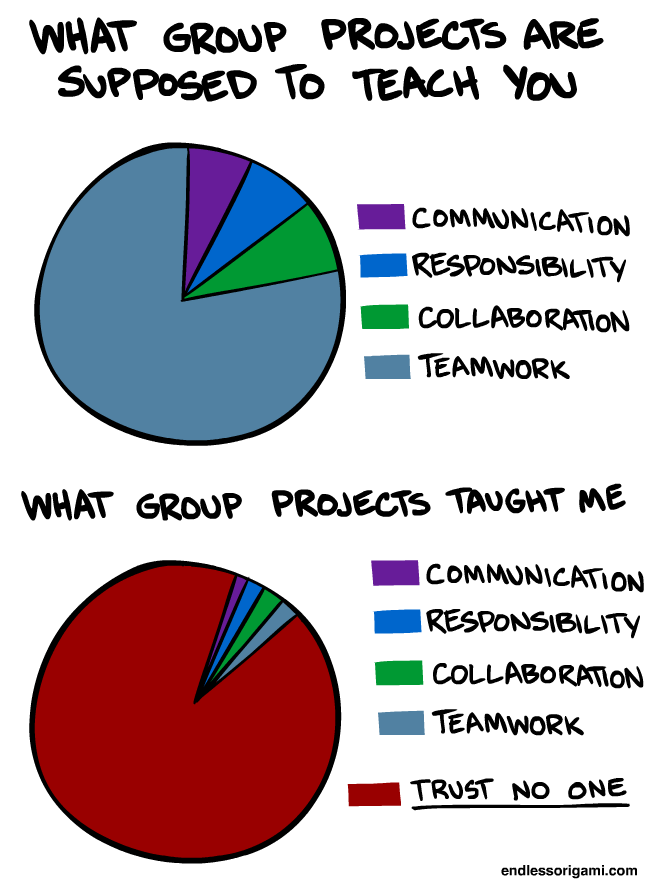 Team projects can be rewarding. They give students the opportunity to address problems too large or too deep for any single individual to tackle in the limited amount of time they can devote to your course. By bringing together students with diverse skills and attitudes, team projects give students a chance to learn from their peers - and, through discussion with those peers, to refine their own ideas.

Team projects can also be - let’s face it - The Worst. I’d like to share a few things that I’ve found helpful in courses. I won’t discuss the grading of projects (in the interest of article length) and the best way to form teams in classes (in the interest of “I’m still not sure how best to do that”), but I will pass along a few techniques for preparing students for working effectively in groups.

Long stretches in academia have given most of us (I hope) a nuanced view of criticism. A contentious group meeting presentation can reveal mistakes or ambiguities and give us a chance to improve our ideas before publishing them or presenting them at a national conference. Few students enter college aware of the culture of criticism in your discipline, and are apt to misinterpret it.

If students interpret criticisms of their ideas as personal attacks, their ideas will improve very slowly. Likewise, students should be wrestling with ideas, not with their teammates. Give the students expectations for criticism in your discipline, and let them know that you value criticism - that it improves your work. This can be an opportunity for students to learn professional boundaries and context, and to step into the role of a practitioner participating in a professional community.

Ask them to identify the group role(s) they gravitate towards

I ask new teams to develop a recommendation on a particular subject. Afterwards, I give them a list of individual roles commonly seen in group dynamics - I use the Benne and Sheets’ list(link is external), but there are many versions out there.

I ask the students to identify (1) the role(s) they played in the exercise, and (2) the other roles they saw in the group (without identifying which of their teammates filled a given role). The group’s recommendation is less important than this opportunity for introspection, and the realization that there are many other roles of value to the team.

As an undergraduate I used to fancy myself as a “leader” - that usually translated into “person on the team who made sure he talked more than anyone else”. As a result, the teams that I worked on couldn’t take full advantage of the collective skills, experiences, and creativity of their members.

There is currently a strong emphasis on leadership training, which is necessary, but not sufficient. A group composed of self-identified leaders isn’t a team; rather, it’s an undifferentiated mass of opinions. A good team member is gracious, flexible, and dynamic. Students that cross train to be comfortable in a number of roles can lead when they’re the right person for it, and can step back into other roles - still making valuable contributions to the group - when it’s the right time for another member to lead.

As a follow-up to the previous exercise, I ask students teams to develop a recommendation on a different subject - but to deliberately take on a role or roles that do not come naturally to them.

Ask them to set individual goals for the project early on

This is motivating to the students, and it can also help to ameliorate (link is external)tendencies of groups to divide tasks by gender. At the conclusion of the project, I ask them to briefly summarize how they worked towards those goals, and what they accomplished.

Tell them what a meeting should be

If it has an agenda and generates action items, then it’s a meeting. If it doesn’t, y’all were just hanging out. (I would say more about this, but I’m late for an ad hoc hangout.)

Get them to meet, often

The first Appendix of the project papers in my courses are the minutes of weekly meetings -  including the participants, agenda, and action items - for the duration of the project.

Give them regular deliverables, with feedback

For any large-scale project, I aim for at least one cycle of ungraded feedback before they need to turn in their final, graded work. This can take the form of a presentation, a poster, or a document, which is reviewed by myself - and often by GSIs and students from other teams as well. This keeps students on track and better models how most of us work - I like to have other eyes on a paper before I send it along to a journal, and I expect most of you do as well.